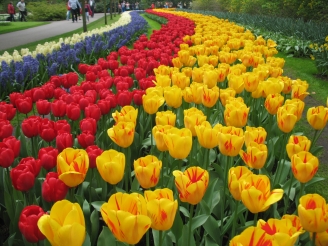 Park Keukenhof situated in Holland is considered to be one of the most picturesque and colourful places on earth. Thousands of tourists from all over the world visit it every year. On the area of thirty two hectares one can find four and a half million tulips of different kinds, as well as huge green fields of greenery, shady avenues, designed flower beds, beautiful ponds and three gorgeous greenhouses. One of the greenhouses is full of fragrant roses, in another one you’ll see exquisite orchids, and the other will impress you with its many species of lilac.

The founders of this unique park were the famous landscape architects Zochers, who gained their fame for their first masterpiece – Vondelpark located in Amsterdam. The building process on the area of the future Keukenhof started in 1840, and the first flower exhibition was opened here in 1849.

The name of the park Keukenhof can be translated from Dutch as “kitchen park”. In the 15th century, large fields and hunting lands were situated here. Spices and herbs used at the kitchen of Jacoba van Beieren Castle were grown there. Nowadays, this park is well-known far beyond the borders of the Netherlands. The park is especially beautiful in the end of April, when the bulbflower parade Bloemencorso Bollenstreek is held. To create flower compositions, talented gardeners plant more than 120 species of tulips; flower bulbs are placed in four layers one above another depending on the time of their blossom. Gentle crocuses are the first to appear, then bright hyacinths beautify the garden, early tulips and then late flowering tulips are the next to bloom. In total, there are more than seven million bulbs and more than two and a half thousand of trees of eighty seven sorts and kinds. This garden is the most popular place for a family rest in Europe.

Feedback
Your attention and time spent on the site IGotoWorld.com is greatly appreciated. If you have any questions, wishes, complaints, or you desire to learn more about us, select the area you are interested in and click the link to make a comment or ask a question.
Feedback form
Request submitted successfully.
Send